Arthur Nortje was born on 16 December, 1942 in Oudtshoorn, on the outskirts of the South African Karoo, and died on the 8th or 9th of December 1970, in his rented Oxford apartment in the United Kingdom, shortly before his 28th birthday. Nortje experienced South Africa during the apartheid years and this influenced and shaped both the course of his life and the poetry he would come to produce.

Nortje was born to Cecilia Nortje and Arthur Kaplan. Being of mixed race parentage, in the face of the various racial laws in place under the apartheid regime, affected Nortje’s view of both himself, and of his South African identity and political influence.

He grew up in an impoverished environment in Port Elizabeth, spending most of his time away from his mother, who was employed as a domestic worker. Consequently, Nortje spent much of his childhood years with other families and this fostered feeling of unsettlement and unbelonging. Given his mixed race parentage and his childhood environment lived in Port Elizabeth – a coastal city part of the Eastern Cape, which can be considered the initial space of encounter between European and African people – Nortje seemed to inhabit the in-between, the border space, in many ways. This was to be a defining characteristic informing most of Nortje’s life and writing.

From a young age, Nortje showed intellectual vivacity. He had a sharp mind and excelled in schooling, most particularly in languages. During his high school years, Nortje developed a keen literary interest and began to attend poetry readings and surround himself with literary-minded individuals. At the end of his schooling, he was awarded bursaries for further studies. While he wished to study at the University of Cape Town (UCT), he was prevented from doing so by the race laws that were in place. Subsequently, Nortje enrolled at the University College of the Western Cape (UCWC), where resources and consideration for students lacked in comparison with establishments such as UCT and Stellenbosch University. Nevertheless, Nortje studied with dedication, graduating with a BA degree in English and Psychology.

During his years as a student in Cape Town, Nortje was introduced to a social life which he took up in quick fashion; he became adept at rigorous academic focus and discipline during the week, to be substituted over the weekends with impressive socialising and partying. Once again, the ‘true’ Nortje seemed to be inhabiting a liminal, in between space in his leading of ‘two lives’. Sociable as he was, friends and acquaintances recall how he was in some ways a difficult and distant sort of individual. Fully imbibing a literary lifestyle, Nortje would often quote poetry (he admired Hopkins, Yeats, Eliot, Auden and Plath).

His own vocation as a poet, he seems to have taken up from around 1962 onwards. This is known due to the notebooks which Nortje began to keep around this time. Towards the end of his degree, Nortje actively sought out and surrounded himself with the company of literary like-minded people. He was now fully on his way to developing himself as a poet.

Nortje graduated with his BA degree at the end of 1963. Another testament to his inhabiting of a sort of double space is found in the graduation photograph that shows Nortje dressed in academic cap and gown, complete with dark sunglasses covering his eyes. Symbolically, this seems to encapsulate the duality of the life that Nortje ultimately led; the public persona and the private interior life, attempting to slot into social spaces and be ‘one of the chums’ was something that did not quite sit – there was always a certain separateness in which he seemed suspended.

After graduating from UCWC with high praise for his capabilities as an academic, as well as further developing himself as a poet, Nortje was awarded a scholarship for study at Oxford, and arrived at the Jesus College in 1965 to study a second BA degree in English. Nortje enjoyed the bustle and the academic life the town provided, once again being able to surround himself with intellectuals and academics, as well as continue his indulgent social life. At this stage however, this indulgence had begun to extend itself to experimentation with drugs. At face value, Nortje did seem to be enjoying a remarkable life in England. But it was in the poetry that he produced that his interior struggles would be hinted at, in themes of exile, absence, fleetingness in love, and considerations of existential existence. A physical and psychic alienation expounded by his condition of self-imposed exile.

After Oxford, Nortje was offered a teaching post in Hope, Canada; this was a remote and small town after what he was used to in Oxford. While there, he continued his same dualistic lifestyle – rigorous academic pursuit throughout the week, and binge-style partying over the weekend. Finding the small-town life of Hope too dull, Nortje eventually moved to Ontario. By 1967, Nortje had developed a dependency on pharmaceuticals.

The poetry which Nortje produced during his years in Canada is themed with ideas of alienation – a contrast to that which he produced during his time at Oxford, which concerned itself with the lack or absence of connection with others – the poetry of the Canadian years is occupied with the complete severance from others altogether.

By the end of 1970, Nortje was beginning to receive serious recognition as a poet. His poetry had, by now, been published in several international journals, as well as being broadcast by the BBC. He returned to London, evidently not finding Canada to be what he wished for. Nortje’s life seemed to be characterised by an untethered drifting. He was unable to root himself anywhere, or possibly even in anything.

Perhaps it was this that finally drove him to his death, perhaps not. The details of Nortje’s death are blurry. Returning home after an evening at the local pub, Nortje overdosed on pills. Whether or not Nortje intended to take his own life is unclear. We can never truly know. What we do know is that Nortje lived a troubled interior life, and this found voice in the poetry he produced. 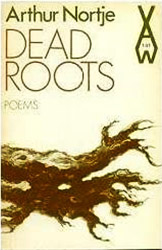 Two collections of Nortje’s poetry were published after his death; Dead Roots (eds Dennis Brutus et al, 1973) and Lonely Against the Light (Ed. Guy Butler, 1973). In 2000, Dirk Klopper edited an athology of his collected poems titled, Anatomy of dark: collected poems of Arthur Nortje. His work over the years of his life reflects his internal struggles, as poems he wrote deal consistently with themes of exile, alienation and melancholy. Outward beauty juxtaposed with inward aching. The beauty of the natural world versus the aching body. It seems that Nortje was only able to express his troubled mind through his poetry – the concerns addressed in his works change as his life entered different stages. Thoughts about South Africa, racial identity and discontent find voice in early poems such as Thumbing a lift written in 1960; “Cars pass by the thin thing of my brown thumb … White flags of exhaust fumes envelop my person / So I’m afterwards only O.K. when, chosen, / A cattle truck careers me towards to horizon.”.

A shift towards more inward, troubled thoughts becomes apparent in Nortje’s later poetry. All hungers pass away, the last poem he wrote just weeks before his death, offers insight in into Nortje’s embattled mind; “Wanly I shake off sleep, / stare in the mirror with dream-puffed eyes: / I drag my shrunken corpulence / among the tables of rich libraries … The rain abates. Face-down / I lie, thin arms folded, half-aware / of the skin that tightens over pelvis. / Pathetic, this, the dark posture. Nortje’s poetry thus offers a window into a mind which, in all other forms, kept itself private, isolated, and quiet.

Nortje’s poetry has not been widely circulated. Yet, it offers a critical discourse on South African society, culture and politics that formed part of his stuggle to resist the evils of apartheid. Through his relatively small but powerful body of work, Nortje is one of the most engaging poets of his generation, “a writer of lyrical self-disclosure and psychodymamic insight” (McLuckie and Tyner, 2004). His complex and contradictory voice, is a poetic personae that deserves to be read: not forgotten.